With the growing popularity of planted aquaria, the freshwater invertebrates are enjoying an increased demand as well. 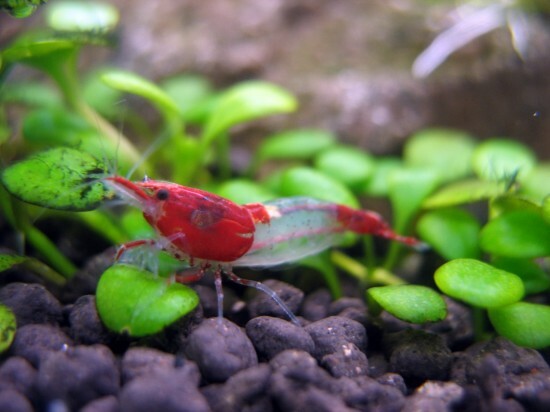 It’s understandable since many of them are ideal for these setups.  A few months back I ran across some of these shrimp in Animals and Things.  This is a pet shop over in Woodbridge NJ, one of the few local places I can think of which carry freshwater shrimp with any regularity.  I purchased all they had and put them in my 25-gallon guppy tank.  They are very happy in there and have been breeding.  These shrimp belong to the genera Caridina.  There are over 120 different species of Caridina shrimp.  It is almost impossible to identify these shrimp to the species level.  The freshwater shrimp hobby is going thru much the same identity crisis as South American catfish, many of which are being identified by a number.  Caridina shrimp are (for now) being identified by their common names or simply as a Caridina species or something else equally inaccurate.

Identification issues aside, this shrimp is fairly distinctive.  They are very small.  Adults will max out at about ¾”, females being slightly larger than males.  Since the females carry their eggs under their abdomen, they are deeper bodied.  Viewed from the side their bodies are translucent.  When viewed from above they are basically dark brown with a row of triangles running down their back.  These triangles are tan in color and are oriented point forward (I would have named them the arrow shrimp).  The females, when carrying eggs, will become more intensely colored.  Caridina shrimp have tiny claws and are completely harmless.

Their preferred water conditions make them compatible with fish like Guppies.  And like Guppies, they can be delicate at first, but when fully acclimated and settled in are quite hardy.  They will do fine at room temperature.  They can tolerate temperatures up to 28oC but in the long run, they will do best a little cooler (23-25oC).  The pH should be slightly acidic, 6.5-6.8 is fine.  GH is important to these guys.  Water that is too soft will not provide them with enough minerals to properly form their shells.  I keep my GH in the range of 6-7o but do not allow it to exceed 10o.  Many fishkeepers raise their GH with Epsom salt.  Epsom salt is composed of Magnesium Sulfate.  While this may be fine for fish, I cannot endorse it for raising shrimp.  The shells of shrimp are composed primarily of calcium, so magnesium is not really addressing their needs.  I use Seachems Equilibrium and or Seachems Live Bearer Salt which contains a broader spectrum of minerals.

You can keep them in a small nano tank, but a mature planted aquarium is best.  In the wild these shrimp congregate in dense populations so don’t just get a few, get as many as you can.  The Caridina shrimp are true omnivores.  They will eat virtually anything organic.  Food pellets, frozen foods like bloodworms and brine shrimp, algae, decaying plant leaves, dead fish, and even the bio-film covering everything in your fish tank are all on the menu.  For the most part, I let them eat the algae or the occasional tidbit that my Guppies might miss.  Hikari produces a specialty food called Crab Cuisine.  It is developed for crustaceans and is high in minerals.  I feed them some of this product at least once a week.

They will reproduce on their own, requiring nothing more than normal maintenance.  The eggs are relatively large for such a small animal.  They will range in number from about 20-40.  The female will attach the eggs to her abdomen until they hatch.  These eggs can range in color from a kind of dirty amber to a greenish color.  The term for a female carrying eggs is “in Berry”.   The newly hatched shrimp are very tiny, but they are fully formed.  They hatch in 28-33 days.  Since the adults will not bother the hatchlings they do not need to be removed.  The hatchlings are quite self-sufficient.  They will forage for food on their own, so no special feeding regime is required.  The newly hatched shrimp will be almost impossible to find due to their small size and a habit of hiding among the plant leaves.  When they get up to about ¼” long they become less inhibited and you will start to see them everywhere.  They do grow quickly when young.

I know this all sounds incredibly easy, but they do have a couple of special requirements that you will need to address.  As any reef keeper can tell you, invertebrates are extremely sensitive to Copper.  Even trace amounts can wipe them out.  Freshwater invertebrates have that same sensitivity.  Obviously, any medication that contains copper is out of the question, but Copper can get into your system by unanticipated means.  If you have copper water pipes in your home you need to let the water run for a while prior to use because water standing in your pipes can absorb some Copper.  You should also draw cold water and bring it up to temperature since less Copper will dissolve in cold water than hot.  Another way that Copper sneaks into your system is by food.  Some commercially prepared fish foods will contain Copper salts and are not suitable so read that ingredient label.  Their other special requirement is Iodine.  The shrimp need this to molt properly.  Make sure you use Iodine and not Iodide.   I use Kent Marine Iodine and dose at a rate of ¼ teaspoon per 25 gallons with my weekly 50-75% water change.  That’s all that’s required so have fun. 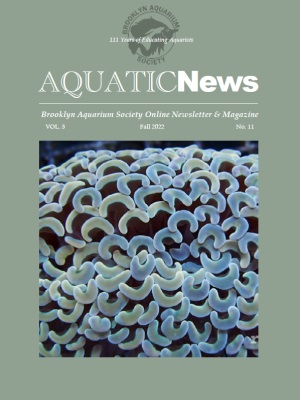