The Flag fish is a unique specimen for several reasons. First, it is a North American killifish from the state of Florida. Second, the male of the species looks like an American flag. The body has black and blue lines alternating with red lines. When looking at the fish on its side, it appears to have black, blue, red and white dots on its body. Last, there are two types of Flag fish that are identical to each other. The difference is that one type prefers an almost marine environment, with a pH of 8.0, hard water with salt in it. The other type is just the opposite and requires soft water, no salt and acidic pH.

I managed to obtain two pairs of these beautiful fish from a pet shop hop that members of Brooklyn Aquarium Society took in the summer of 2010 to visit our sponsor retail establishments. I brought them home and placed them in quarantine consisting of a bare 10 gallon tank with a corner filter containing charcoal and ammonia chips. I also placed a few artificial hanging mops in the tank. The pH was 7.6 and the temperature was 80 degrees Fahrenheit. One male chased his tank mates around for a month. They ate sporadically and showed no signs of breeding. When the quarantine time was up, I moved a pair each into 5 gallon tanks, side by side. To prevent aggression between the males, I placed newspaper between the tanks so they couldn’t see each other. A few months went by with no spawning hints, so I decide it’s time to change the environment. 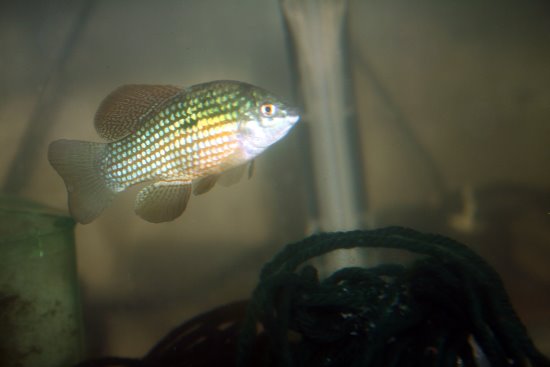 One tank I set up with hard water, alkaline pH and dropped the temperature to 77 degrees Fahrenheit and I left 1 floating mop and 1 mop container filled with gravel so it would remain on the bottom. I softened the water gradually over several weeks and lowered the pH in the other tank, while maintaining the temperature at 80 degrees Fahrenheit. I also added Amazon Black water extract and almond leaves. This time both mops were weighted and remained on the bottom. Both pairs of fish were goven the exact diet of flakes and frozen food (blood worms and daphnia) with feedings every third day of live black worms cut into small pieces. 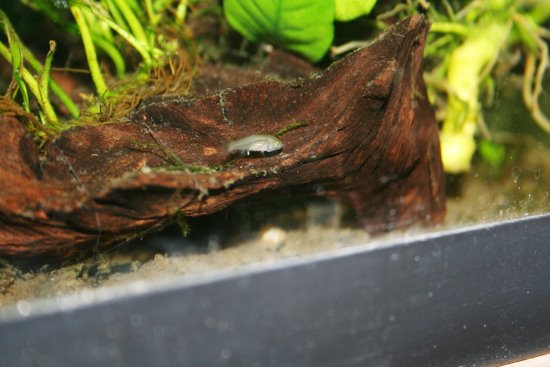 After several weeks, both pairs started laying eggs. The pair in the hard water had laid approximately a dozen eggs on the mop that stayed on the bottom. All were soft and fungused even with acriflavin added to the tank. A few days later, the pair in the acidic water laid approximately 20 eggs. I removed the eggs into a plastic container and added acriflavin again, but after a couple of days all the eggs fungused. Six days later, the pair in a water environment of 6.0 – 6.2 pH, temperature of 80 degrees Fahrenheit and a GH of 3, laid 13 eggs on a black mop and 132 eggs on a green mop. Out of the 145 eggs that were laid, 115 eggs hatched. These fry were moved to a 5 gallon tank and fed live vinegar eels and frozen rotifers. After a week, they were fed frozen baby brine shrimp and crushed flakes. The pair in the hard water environment stopped laying eggs.

The American Flag fish is a great killifish that will intrigue you. They are great alone in a tank or with other fish in a well planted, dark gravel aquarium. Whether you want to breed them or not, it is the patriotic fish to keep in every American home. Enjoy them!

Copepods are changing the face of aquaculture

at a screen near you, more details to follow